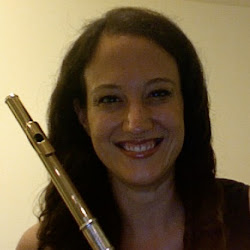 Madelene Campos is a native of Glen Ellyn, Illinois. She began her musical studies singing in the Glen Ellyn Children's Chorus, with whom she performed alongside the Chicago Symphony Orchestra. She received a full-tuition scholarship to attend the University of Illinois in Champaign-Urbana for Piano Performance, and graduated with a Bachelor's degree in Flute Performance.

During her studies, she won numerous awards, including First Prize in the Society of American Musicians Young Artist Flute Competition, the Greek Woman's University Club Music Competition, and was a finalist in the Cynthia Woods Mitchell Young Artist Competition in Houston, Texas. She was also the 2nd place winner in the Chicago Flute Club Orchestral Exerpts Competition in 2007.

Ms. Campos earned her Masters degree in Orchestral Studies (with a focus on flute and piccolo) at Roosevelt University – Chicago College of the Performing Arts. While at Roosevelt, she was the First Place Winner of the Concerto Competition, resulting in a solo performance of the entire Nielsen Flute Concerto with the RU Symphony Orchestra.

She has been a member of the Civic Orchestra of Chicago, the Spoleto USA Festival, the Washington Island Chamber Music Festival, and the Immanuel and Helen Olshan International Texas Music Festival. She has performed with the Lyric Opera of Chicago, Milwaukee Symphony, the American Ballet Theatre, and the Chicago Philharmonic. Ms. Campos gave a solo recital at the Chicago Cultural Center for the Dame Myra Hess Memorial Concert Series in August of 2008, and performed 2nd flute and piccolo for the entire 2008-2009 season at the Lyric Opera of Chicago.

She currently teaches both flute and piano and freelances in the Chicagoland area and occasionally flies to Honolulu, Hawaii to perform with the Hawaii Opera Theatre as well as the Hawaii Symphony Orchestra.